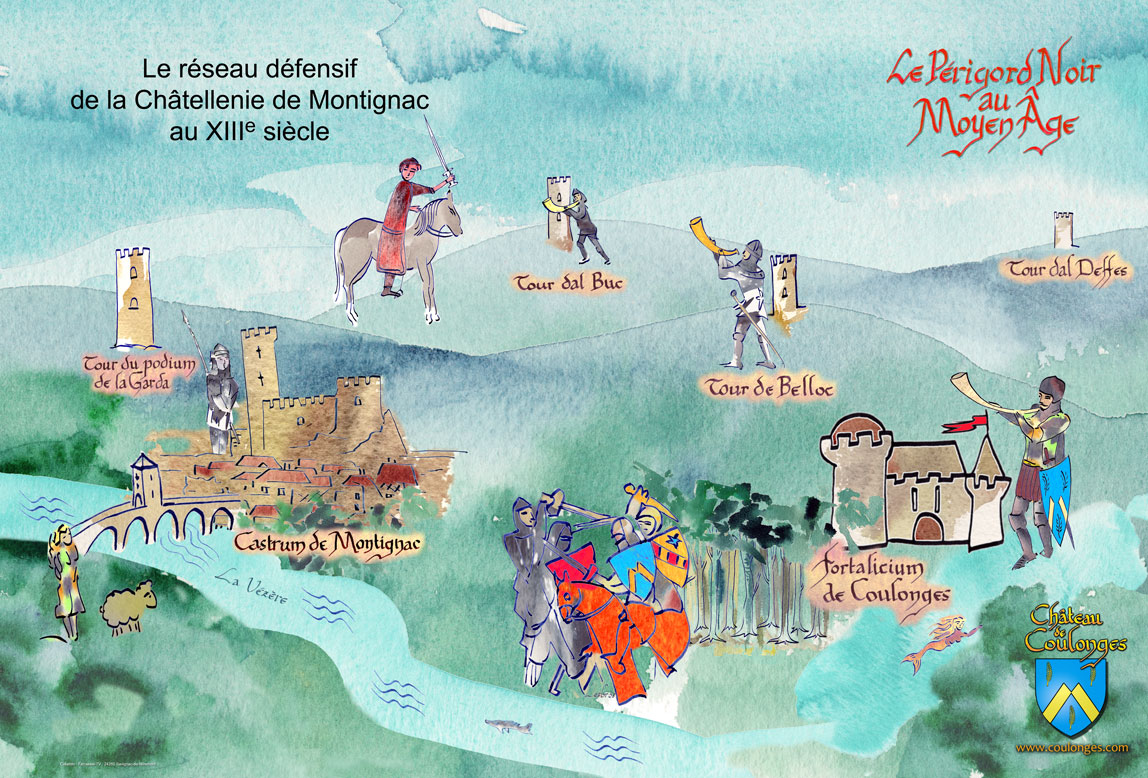 France versus England: a never-ending match in mediaeval Perigord

In the Château de Coulonges you’ll find yourself catapulted back amongst mediaeval knights living in fortalicia (fortified buildings) which were often, to begin with, sturdy keeps surrounded by ramparts. What the knights desired most was by no means comfort; they wanted to be their own masters and masters in their own homes: strongholds where they could protect themselves against attacks from the English, the neighbouring lord or the troops commanded by the King of France (to whom they had theoretically sworn allegiance… but in theory only!). The knights enjoyed hunting and waging war whenever they felt like it and they were relatively hostile to any form of authority, even though feudal society was of course hierarchical in its own way. It was to take a good three centuries before the State really began to mean something in France, thus closing the “knights and troubadours” chapter in our history books.

In the Middle Ages the situation in the Périgord was of a rather exceptional nature, so here are a few landmarks:
In the year 1000 the Capetian dynasty succeeded the Carolingian dynasty and the Frankish Empire when Hugh Capet was crowned King of France in 987. After the barbaric invasions, France was devastated: the countryside was ravaged, roads and ports were cut off, the churches and monasteries were pillaged or burnt to the ground. Everything had to be created anew and feudalism was to become the vehicle of change. Feudal society was made up of three social categories, each with its specific role: the nobles fought, the peasants worked and the clergy prayed. The Capetian reign, which began amongst total destruction, lasted three centuries and was constantly under threat from both France and England, due to a strange combination of circumstances:

That is why control of the Aquitaine (which the Périgord is a part of) was so fiercly fought for by the Capetians and the Plantagenets. It was the prelude to the Hundred Years’ War (1337-1453) during which England sought to annex France, until Joan of Arc sprang to the fore in the middle of the fifteenth century. Between the twelfth and the fifteenth centuries the Périgord was thus to suffer repeated attacks from the English troops and the French troops. The latter were to have the last word. So, for the people in the Périgord it was vital to learn how to defend themselves by giving the alert as quickly as possible in the event of an attack so that the knights could prepare themselves for counter-attack and the peasants could take refuge at the back of “cluseaux”, natural cavities which they used as hiding places when danger lurked. It is in this context that the Château de Coulonges appears in the records under the name of “fortalicum” i.e. fortified place.